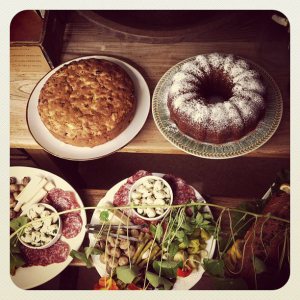 One of the many fabulous spreads I have enjoyed since I started working for Hedgebrook.

I am sitting at a coffeeshop and catching up on some work.  On the way to the coffeehouse, the idea for this post came to me: writing about how awesome it is to be in the company of women who like to eat.  I mean really eat.

I am not talking about grabbing coffee or tea with friends and sharing a pastry.  Or having soup and salad with a friend and feeling vaguely virtuous afterwards.

I am talking about the joy of watching Kelsye, my co-worker, attack a meatball, turkey and bacon sandwich which dwarfed her small frame.  Or at Hedgebrook staff meetings where we take the first bite of whatever Denise has made us (her mac and cheese and enchiladas are my favorites). That first bite where all the women emit a visceral “Oh my GAWD this is so good!!!!” whether it’s audible or not.  (Sometimes that feeling comes out in a sigh of relief and appreciation, barely louder than a whisper.)

At Hedgebrook, you EAT.  You EAT with WOMEN.  Powerful women. Soulful women.  Intelligent women.  Irreverent women.  Women who have won Pulitzer Prizes.  Women whose writing you watch on television the next day.  Revolutionary women. Women who make you take stock of who you are, what are you doing to make the world a better place, what are you eating and the company you keep when you are eating.

When you are hired at Hedgebrook, I feel that part of the orientation should include an overview of feminist literature and a food and wine primer.  I am the youngest person on staff and still learning.  But one thing is for sure, when you work at Hedgebrook, you are surrounded by feminism and foodies.

Sometimes I work at the retreat on Whidbey, but most of my time is spent in our Seattle office.  No worries–we eat there, too.  In Pioneer Square, if you’re willing to hoof it a few blocks, you can get almost any kind of cuisine.  I have been lovingly introduced to spicy chicken pho and Beard Papa’s cream puffs at Uwajimaya.  One day the three of us walked almost all the way to Pike Place Market to a store that will cover almost anything in chocolate, only to realize on the way back that there was an identical store three blocks away from the office.

I love my co-workers, because we are instantly able to create a farmhouse kitchen table wherever we choose to eat lunch.  We immediately switch gears from talking about Twitter and databases to talking about preschools, favorite places to eat, where we all like to shop, pets, family…the list is endless.  But I love that we are able to switch from head-talk to heart-talk.  And eat good food while laughing and smiling.

Whether or not we acknowledge it, there is a collective mindset of nurturing our small but mighty satellite hive as well as filling our stomachs with warm, delicious sustenance.  Once we ate at an Irish pub for lunch.  We all ordered various burgers and pulled pork sandwiches.  Two men in their 50s or 60s sat next to us, eating caesar salads and drinking two or three beers.   We were having a very animated conversation about a news item citing the lack of childcare available at the Democratic National Convention.  I don’t know if it was the subject matter or volume that they found annoying, but there was a lot of eyebrow scrunching going on at the neighboring table.  But we didn’t care.  Because we were joyfully eating in the company of other women.

I had uploaded the picture for this post and left it to simmer while I worked on other projects.  I was then interrupted by a very thin, possibly drug-addled woman  who pointed at me and yelled through the window “You, YOU are a fat, crazy, stupid bitch!  Go work out!” and then staggered off.  I was shocked.  Then I abandoned my other projects and started blogging.  I can’t help but think that woman might be happier if she ate something.

4 thoughts on “The Joy of Women Who Eat”