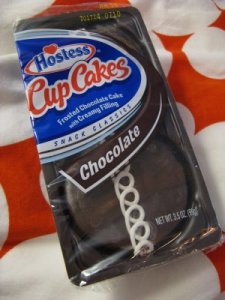 I blame the crows.  As I locked up my car at the park and ride, they looked down at me from their perch on the telephone wire with such distain.

“Oh, what a busy human, so self-important. Has to go to work…”

I could no longer stand the monotony. Peeling off of the 6 AM ferry was a Hostess snack cake delivery truck.  I have never been very stealthy, but somehow, I managed to summersault across the highway and jump onto the back of the truck like a ninja.

Quickly and carefully, I unlatched the back door and hopped inside.

I took my swiss army knife from my commuter back pack (standard issue) and ripped into the first box.  Twinkies. Delicious, but not what I was looking for. I tore open the next box.  Suzy Q’s. Damn. The next three boxes I opened were filled with Ding Dongs, Snoballs and Zingers.  But where were the classic cupcakes?

I channeled my inner Zen master. “If I were a Hostess Cupcake, where would I be in this delivery truck?”

I must have been extra tuned into the universe, because immediately, I found myself transported INSIDE a human-sized Hostess Cupcake.

There were no two ways about it, I was going to have to eat my way out of this cupcake.

First, I punched a hole through creamy filling and the outer chocolate cake layer. I had to be able to breathe.  Initially, I started taking dainty bites of the creamy epicenter that held me. Then I just went hog wild. I attacked eating that cupcake with such fervor, I had demolished the entire thing in just under 6 minutes.

Full to bursting with snack cake-y goodness, I fell to the ground, frosted with chocolate crumbs.

What a fantastic way to start the day.